Isobel Abulhoul came to Dubai in 1968 and co-founded Magrudy’s, a bookshop chain, in 1975.

In 2008 Isobel founded and is Director of the Emirates Airline Festival of Literature, the Middle East’s largest celebration of the written and spoken word. In 2013, HH Sheikh Mohammed Bin Rashid Al Maktoum, Vice President and Prime Minister of the UAE and Ruler of Dubai, and also the Festival patron, issued a Decree forming the Emirates Literature Foundation, naming Isobel as one of the trustees on the Board. In addition, Isobel also holds the position of CEO of the Foundation. She is also a Trustee of the International Prize for Arabic Fiction Board, Secretary General of the Kalimat Foundation and Director of the Board for the Mohammed Bin Rashid Library.

During her tenure as Director of the Emirates Airline Festival of Literature, the festival has won the Best Festival title at the Middle East Event Awards in 2013, 2014 and 2015. The Festival has been awarded as Best Family Day out given by Time Out Kids Dubai In October 2016 and received another award as Favourite Festival given by What’s On awards in November 2016 and 2017. Emirates Literature Foundation honoured at the 3rd UAE Pioneers Award 2016. The Festival also has recently won the Best Arts and Culture Event at the Middle East Event Awards in 2018.

Isobel has received several awards and accolades over the years such as Cultural Personality of the Year by Dr. HH Sheikh Sultan Bin Mohammed Al Qasimi, the Ruler of Sharjah in 2010, prestigious OBE award by HM Queen Elizabeth of Great Britain in 2012, Cultural Icon of UAE Award at the 3rd Petrochem GR8! Women Awards – Middle East 2013. She was also selected as one of the Most Influential Brits and the Most Inspirational Woman living in the UAE in May 2013. She also received the Special Cultural Award from the Al Owais Creativity Awards 2013, ‘Imprint of Thought’ award at the Watani Emarat Humanitarian Work Award ceremony 2013. She received the Outstanding Contribution Award at the TimeOut Kids Awards, Femina Unstoppable Woman Award 2015.

Isobel Abulhoul is currently busy with the Foundation and its year round activities. 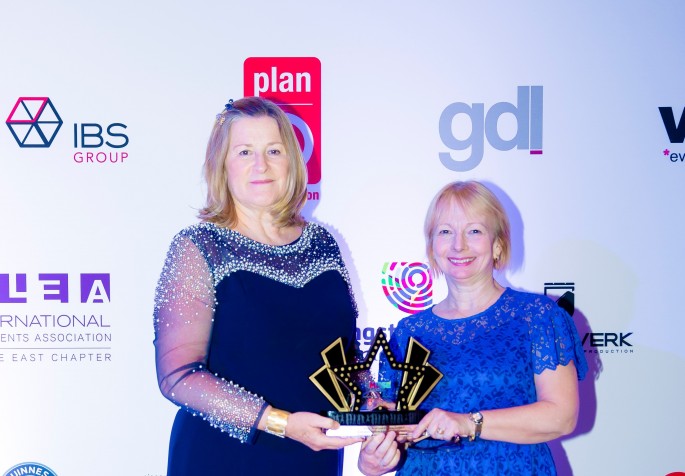 Check out the latest 2018 Festival Highlights: